Gaming is a way to relief stress and not think about daily life. Lately, even gaming can’t keep me interested. But my mind is busy all day long with all kinds of stuff, so yesterday I gave mindmapping a try. A mindmap for what is needed to create a gameserver. A server that keeps track of the users, their progress, serves the game itself to the clients, etc. One thing a gameserver needs is a way to store all that data, so a proper database is needed. So I looked at several candidates and in the process I came across Redis. Maybe not the easiest backend database when you need graphing for social features, but absolutely the perfect toy to keep my mind occupied for some time.
Redis has enough client APIs, like most databases. Let’s see if we can use the C#/.Net API from within Unity. Touch/collect this item and increase a value in the Redis database: the XP of the user playing the game.

I will probably create nothing for real, but it’s nice to be not bored for some time.

Yesterday I started playing Screeps and bought it even when I hadn’t finished the (free) tutorial yet. I mentioned Screeps earlier, and it’s now in an almost ready state. It’s available on Steam.

The game looks simple, but it’s not. As I mentioned before, it is only as good as the code you put into it. You can spawn creeps with certain properties, so they can harvest, or attack, or heal. But unless you run a “program” that actually uses these properties, the creep is not going to do a thing and will die without being of any use to you.
The tutorial teaches you to give a creep a role, and the behaviour of each role will be specified in a javascript file for that role.

You will make mistakes. And I don’t mean mistakes in your code, since the code will only run (of course) when it’s syntactically correct. No, I mean mistakes about how to play the game. A stupidly placed spawnpoint. Choosing a room full of swamp. Forgetting that other creeps will attack you, and you didn’t think of defending your base. Creeps will die (of old age), and you forgot to respawn them. That kind of mistakes. And with each mistake you solve, your code gets better. And meanwhile……you get better at coding! 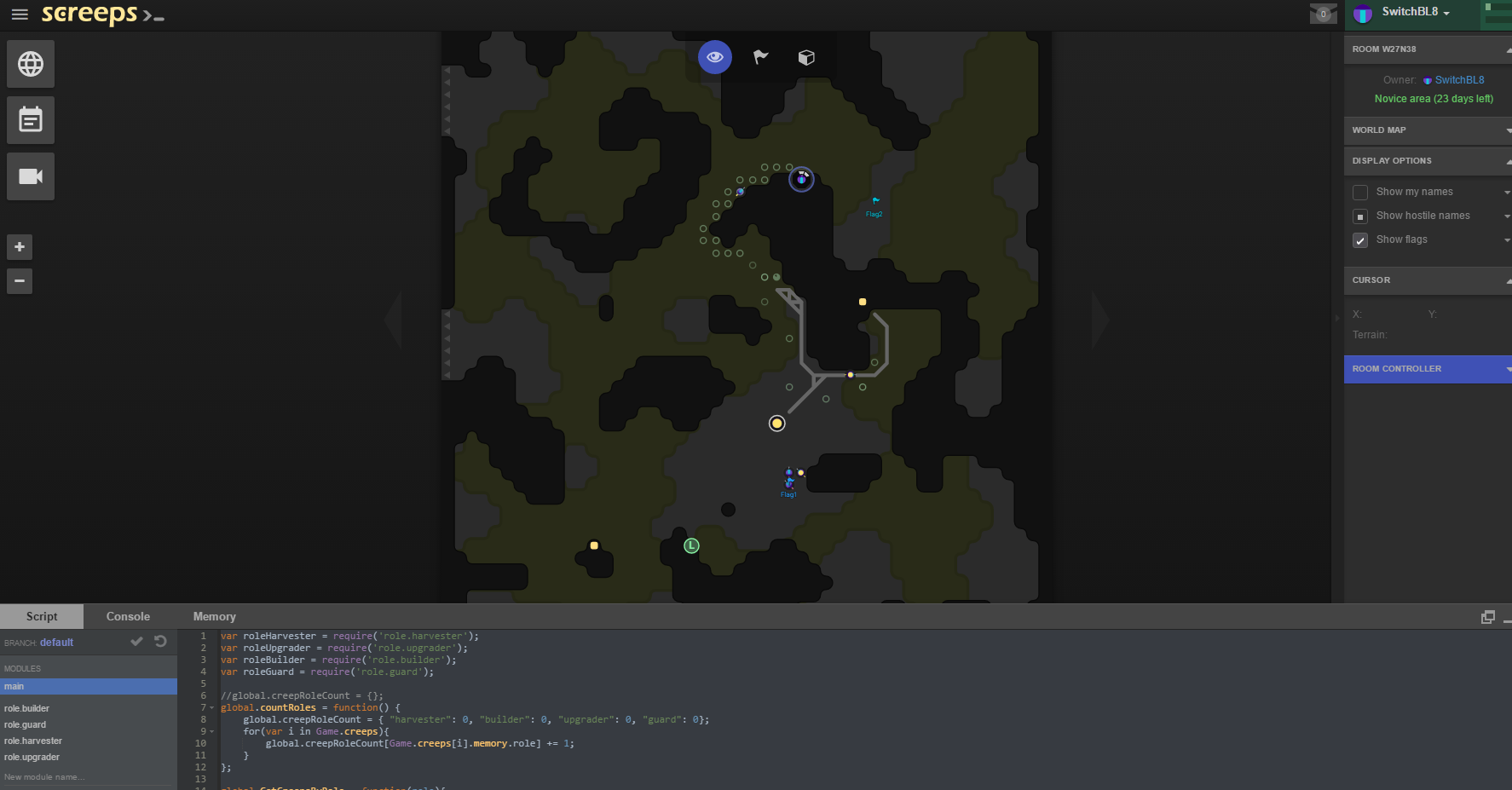 This week I bought StarCraft II: The Complete Edition. Did some campaign in Wings of Liberty and Heart of the Swarm, had an Archon session with my colleague, and today I finally won a 1VAI game, albeit a “very easy” one. But that’s my level at the moment.

To get better, I need to practice. A lot. It’s not like Diablo3 in which your heroes get more powerful by getting better gear, it is me that has to improve. What do I need to build. When do I need to build it. When can I attack. What do I do when I am under attack. And most of all, I need to do that by keyboard preferably, not by clicking around in the build menus.

For now I like the Zerg the most, but I’m warned that it is a difficult race to deal with. One of the advantages is that the larvae can mutate into just about anything, but overall Zerg needs a lot of (micro)managing.

Update: just had another win. Ultralisks are nice creatures.

Early this month I bought an XBox One. Basically to play the updated version of Diablo 3, since the XBox 360 version is “old” and won’t be updated anymore. A big sum of money, just to play one game, but I thought it was worth it. And….judging by my playtime on the PC (practically zero) it is.

Recently I bought Destiny (a game by Bungie) as well. Wow. What a beautiful game, but for a longtime PC gamer, doing FPS-like stuff on the controller is hard. Very hard. But still the game is playable, so I’m progressing albeit it slowly.
It’s quite different from what I ever played. Gear has levels (its levels up), so as you progress, your same gear can get better stats or abilities! Very nice. No need to trade in that trustworthy gun 🙂
Bungie seems to have cancelled the crossplatform gaming, but even without that, it’s a brilliant game. There’s a trial, so why not check that out?

Basically you are presented a sandbox, and you have to program the AI (etcetera) in Javascript. And the better you are at programming, the better you will do in this game. Can’t wait until it’s available.

It’s been just over a week (9 days to be exact) that I started playing Ingress, and I became level 5 yesterday. It’s not as fast as some people level up (level 6 can be done in a couple of days or so), but I mostly play alone and did the first days only on foot. Now I use the car more.

Levelled up to L5

Just read the news about the Steam Machines Valve is about to put on the market. Funny thing is that one of the suppliers is Origin PC. So that would be Steam on Origin 😉

Had a lovely -belated- Christmas dinner with my sister and brother-in-law. I fell ill at the end of the first Christmas day, so I had to postpone my dinner that was planned for the 26th. My sister fell ill as well. I was recovered enough today, and she decided she would not be a party-pooper and decided to come visit me. I stripped the starters from the menu at her request, and after all we had a lovely evening.

After cleaning up, I went upstairs to play some games. To my surprise, my PC had two black screens with only a cursor in the top left corner. Okay, let’s reboot. Same result. BIOS setup revealed that everything was seemingly in working order. But…..what’s that, only one harddisk. The normal HDD, not the SSD bootdisk. Unplugged the power, unplugged the normal HDD, boot and……

Meaning the BIOS can’t find ANY boot device while only the SSD is connected. Let’s see what my server thinks of this disk. It’s linux, and it has hot-swap on the SATA ports enabled, so that should be a piece of cake.

And of course it was: to linux the disk was dead as well. On two different ports. After connecting via hot-swap, or after hard reboot.

Meaning: my desktop PC is out of order for now. The SSD has 36 months of warranty, and only 18 have passed. So yes, an OCZ Vertex4 128GB died after only 18 months of (not very intense) use. How fucked up is that?

Since yesterday I started playing Please Stay Calm on my phone. It’s a zombie game, kind of turn based. You have a limited amount of energy (and health of course) that you can use to scavenge for stuff or to hunt/kill zombies. Other than most games, the scavenging and hunting is done GPS based, so the game will list locations (shops, streets, etc) you will know.

Of course you can connect with friends (via Facebook or the app). You need to level to progress. You need money (found by scavenging or by selling stuff you found) to buy weapons, build safehouses, etc.etc.

It’s a simple game to play, the interface is not difficult and you don’t need superfast reflexes to dodge the zombies like most other games. I like it. At the moment I’m only at level 4, but for less than a day playing that seems okay (maybe it’s not).

Have a look here: http://pleasestaycalm.com/ and find the app in the Playstore or on iTunes.

To save me the trouble of constantly setting up the group and gaming, and then switching back to a normal extended desktop (with max resolutions on each monitor), I created two presets in the Catalyst Control center. Easy. Just do your setup, go to Presets (second item in the accordion) and click on Add Preset. Name the preset so you can recognize it. Do another setup and add it too. Now you can switch between the presets by right-clicking on the system tray icon of the Catalyst Control Center and selecting “Invoke preset”. Choose the appropriate preset, and you’re done.